Not only is this lost mine alleged to be rich in gold, but it’s also commonly viewed as cursed. Decapitations and other strange deaths, as well as numerous vanishings, shroud the legend. As a result, it’s become one of the most famous lost treasure tales of all time. 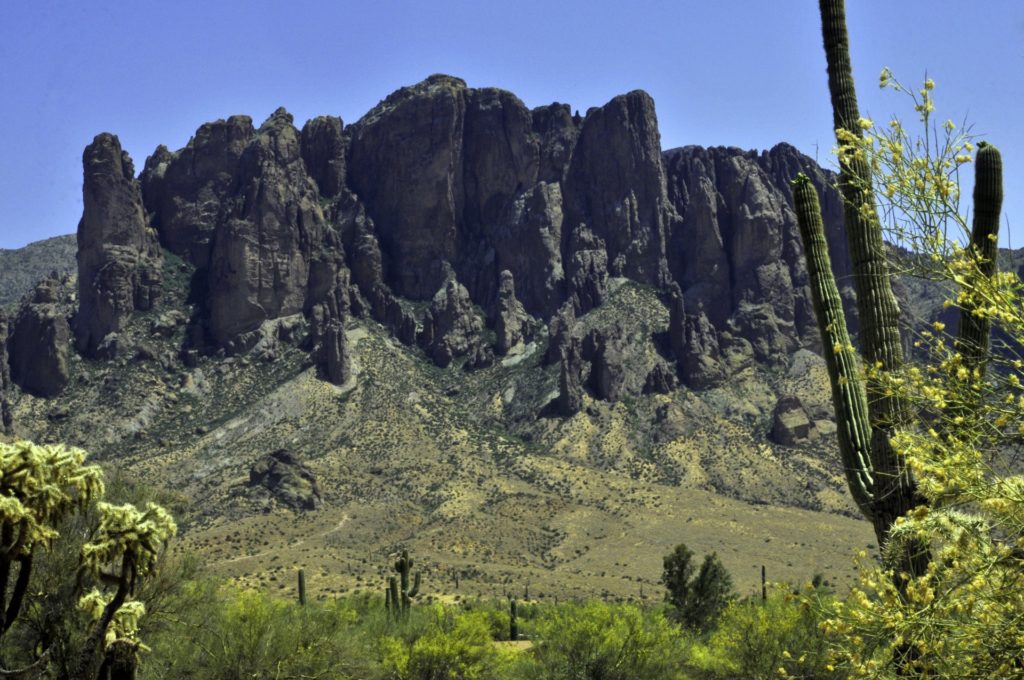 Searching for Gold in All the Wrong Places 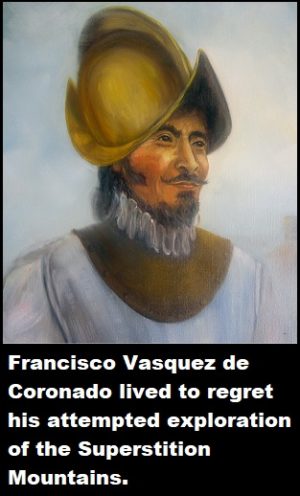 In 1540, Spanish conquistador Francisco Vasquez de Coronado led his troops deep into the Superstition Mountains of Arizona. They were searching for the mythical “Seven Cities of Gold.”

The region was heavily inhabited by Apache Indians, who considered the mountain sacred ground. They warned the Spaniards that the mountain’s “Thunder God” would take revenge upon any trespassers, causing tremendous suffering and horrible deaths.

Vasquez de Coronado chose to disregard the warning. Almost immediately upon entering the mountain range, his men began to vanish. They were later found dead, their bodies mutilated and decapitated.

So begins one of the most tantalizing treasure tales in the history of the American West: The Legend of the Lost Dutchman Gold Mine.

Not only is this lost mine alleged to be rich in gold, but it’s also commonly viewed as cursed. Decapitations and other strange deaths, as well as numerous vanishings, shroud the legend. As a result, it’s become one of the most famous lost treasure tales of all time. 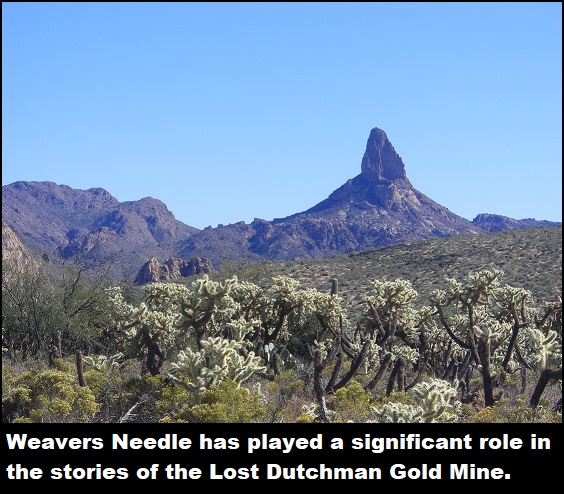 The Superstition Mountain range is the second most photographed and painted landmark in Arizona (after the Grand Canyon). The range occupies about 250 square miles, just each of Phoenix. Its primary peak, dubbed Weavers Needle, stands 3,000 feet high. The Needle has played a significant role in the stories of lost treasure, as its shadow reportedly indicates the location of a rich vein of gold.

Some historians claim that the range was named by Vasquez de Coronado and the remainder of his men who fled the mountain in fear. But others tell a different tale.

According to George Johnston of the Superstition Mountains Museum, the name came from the local farmers in the 1860’s. That’s when the Pima Indians told them stories about “strange sounds, people who disappeared, mysterious deaths, and an overall fear of the mountain.” The farmers called the Pimas “superstitious” about the mountain, and the name stuck.

In the centuries after Vasquez de Coronado’s harrowing ordeal, several other gold mining expeditions met a terrible fate at the hands of the avenging Apaches. Take, for instance, the wealthy Peralta family from Sonora, Mexico. For almost a century, the Peraltas unearthed gold treasures from the Superstitions. Their plundering ended in 1848, however, when all but a few of their crew were massacred by Apaches. 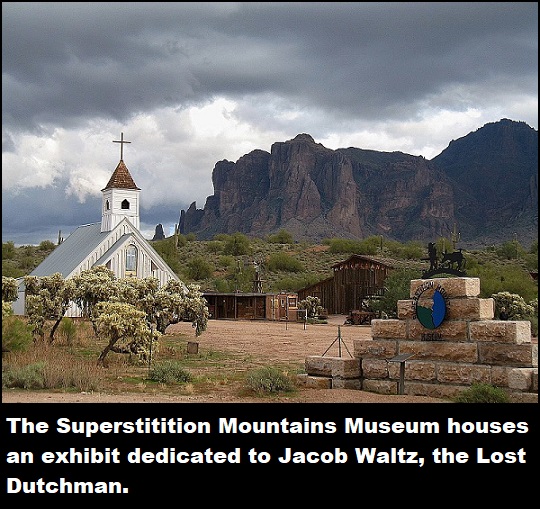 Which bring us to the 1870’s and our mysterious “Dutchman.” Jacob Waltz (or Walz,) was a German immigrant who had relocated to Arizona. (At that time, “Dutch” was considered the English equivalent of “Deutsch,” which is how Waltz received his nickname.) Waltz worked as a prospector and owned a homestead on the northern side of the Superstition Mountains’ largest peak.

Some say the Apaches had hidden the gold after the Peralta massacre, and the Dutchman happened to stumble upon it. Others believe Waltz was directed to the stash by a surviving Peralta.

In any event, sometime around 1877, Waltz and his prospecting partner Jacob Weiser began showing up in nearby Phoenix with lots of gold. The two miners were seen paying for supplies with high-grade gold ore. They never stated where it was coming from, nor did they ever file a claim.

A few years later, Weiser disappeared without a trace. Speculation ran rampant, with some saying the Apaches finally caught up with him and others alleging he had been killed by Waltz.

For the next ten years, Waltz would often appear in town, saddlebags brimming with some of the richest gold ore ever seen. He’d then disappear back into the Superstitions.

When questioned about his mine, Waltz would give contradictory statements and directions. And whenever folks tried to follow him out of town, he’d lose them in the mountains’ many clefts and canyons.

In the spring of 1891, a catastrophic flood in Phoenix destroyed Waltz’s farm, and he subsequently contracted pneumonia. On October 25, 1891, with sacks of gold under his bed, Jacob Waltz died a rich old man.

Ever since Waltz’s death, thousands of fortune hunters have been seeking the Lost Dutchman’s gold mine. And over the years, one after the other, explorers have turned up dead. Many of their bodies have been found either decapitated or with bullet holes in the skull, causing some to theorize that the mountains’ forbidding terrain drove explorers mad and they turned on one another.

Some other reasons these treasure seekers don’t always come out alive: 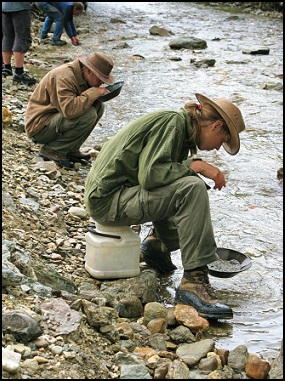 In fact, according to the U.S. Forest Service, the Superstition Mountains area is the most rugged wilderness system within the United States. About four or five hikers die each year.

And yet, folks continue to search for a treasure they are convinced is there and theirs for the taking. Arizona historian and folklorist Byrd Granger estimates that about 8,000 people annually attempt to locate this legendary mine.

They’re not necessarily crackpots, either. Former Arizona attorney general Bob Corbin searched for the Lost Dutchman Gold Mine off and on for 50 years.

As of 1964, the Superstitions are a federal wilderness area and Arizona State Park. Which means (alas!) any gold found must now be surrendered to the government.