Fossil Discoveries: When Miners Dig Up the Past

Fossil Discoveries: When Miners Dig Up the Past

While carving through rock at the Millenium Mine, a vast Alberta oil sand pit near Fort McMurray, Funk clipped something much harder than rock. 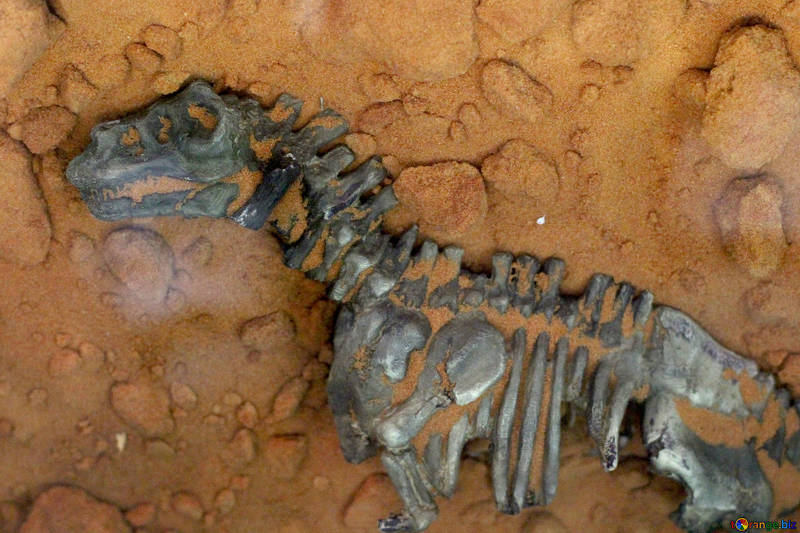 For heavy-equipment operator Shawn Funk it was just an average Monday in the spring of 2011. Until it wasn’t. 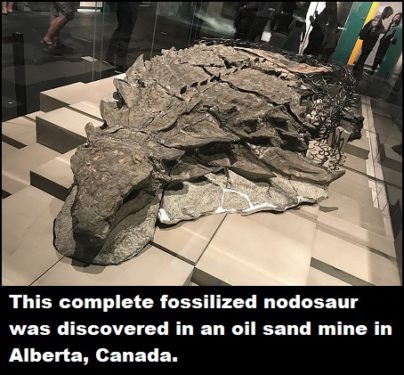 While carving through rock at the Millenium Mine, a vast Alberta oil sand pit near Fort McMurray, Funk clipped something much harder than rock.

He and his supervisor speculated that they may have uncovered skeletal remains of some prehistoric creature. But in fact, what they had found was an actual dinosaur (a “nodosaur,” to be exact), petrified from the snout to the hips.

The specimen included fossilized remnants of skin, bumpy armor plates and scales. The fossil was so well preserved that it “might have been walking around a couple of weeks ago,” according to one paleontologist.

Scientists say the nodosaur was an 18-foot-long, nearly 3,000-pound behemoth of a herbivore that largely kept to itself. The 2,500-pound fossil is currently being housed at Alberta’s Royal Tyrrell Museum.

This is just one of the amazing fossil discoveries made by the mining industry over the years. Here are a few others: 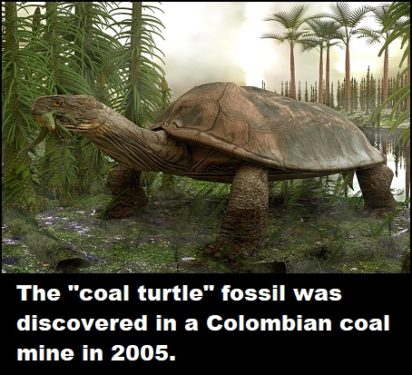 When most of us think of turtles–even the giant kind–we likely don’t envision them with shells the size of kitchen tables that could seat six. But that’s what was discovered in 2005 in a coal mine at Colombia’s Cerrejon formation.

Dubbed the “coal turtle,” the specimen’s skull measures about 9.5 inches, roughly the size of an NFL football. Even more impressive is its shell. At 5 feet 7 inches long, it was the same height as the doctoral student who discovered it. The coal turtle’s fossil reveals that it had powerful jaws that helped the omnivore eat anything, from mollusks to crocodiles.

Scientists believe this monster of a turtle inhabited the South American rain forest about 60 million years ago. That’s five million years after the dinosaurs vanished.

In 2011, a piece of a rib from a prehistoric whale was found in a North Carolina phosphate mine. But this wasn’t your typical fossil. This fossilized whale rib displayed three distinct tooth marks, indicative of a shark attack. 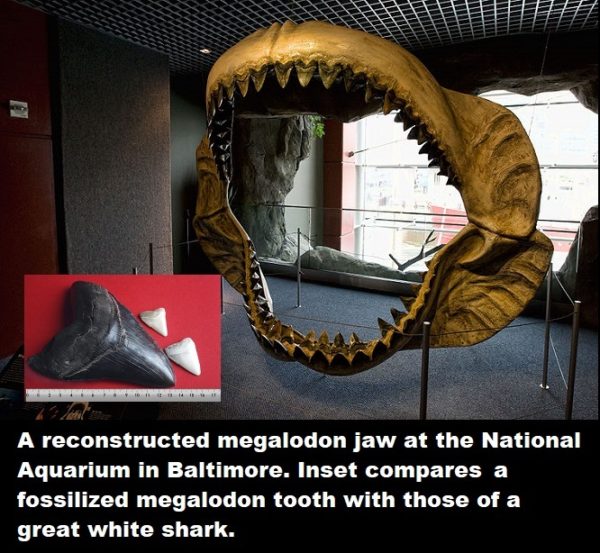 The spacing between the tooth marks, 2.5 inches, enabled scientists to determine that the beast that attacked the whale was a mega-toothed shark called a “megalodon.” The unique fossil offers scientists a rare glimpse of the interactions between prehistoric sharks and whales about four million years ago.

The location of the North Carolina phosphate mine appears to have been a megalodon hotspot during the Pliocene period. In fact, so many megalodon and other marine fossils have been collected there, the town of Aurora built a fossil museum in order to preserve and display them. 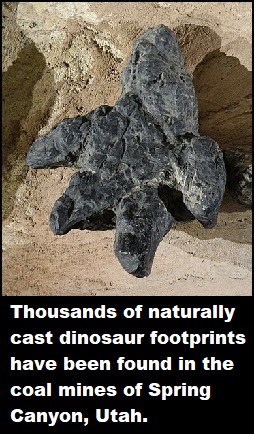 Thousands of natural casts of dinosaur footprints have been discovered in the roof surface of a coal mine in Spring Canyon, Utah.

These casts occur as protrusions which hang down from the roof. They can be up to three feet long, and weigh hundreds of pounds. The casts usually occur in trackways where prehistoric bipeds frequently walked. In places, the roof surface is so covered with dinosaur tracks that they overlap, similar to livestock tracks in a corral.

The natural casts were created when peat from the forest floor gradually turned to coal, filling the prints with shale material. As the shiny coat of coal was mined from the bottom, the casts were exposed.

Nowadays, it’s not uncommon to see the casts displayed as lawn ornaments at miners’ homes or as conversation pieces in reception areas of local businesses.

In a coal mine near the southern Illinois town of Galatia lies the largest fossil forest ever discovered. In fact, it’s at least 50 times larger than the previous contender. The forest extends more than 100 miles in one direction; its exact width has not yet been determined.

Dating from 307 million years ago, the forest lies entombed in a series of eight active mines, from 250 to 800 feet underground.

“Effectively you’ve got a lost world,” said Howard Falcon-Lang, a University of London paleontologist. “It’s the closest thing you’ll find to time travel.”
Hundreds of millions of years ago, trees and other plants grew atop thick peat that eventually compressed into coal. When the coal was extracted, the forest’s fossilized remains could be seen in the mine’s shale ceiling. Which explains why the fossil forest can be viewed only from below.

“It’s a botanical Pompeii, buried in a geological instant,” said William A. DiMichele, a Smithsonian paleobiologist and one of the forest’s discoverers. 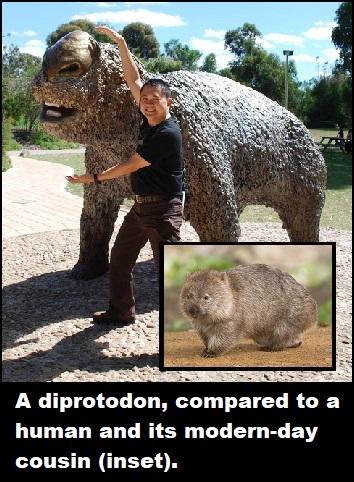 In 2012 fossils from about 20 species of Australian megafauna were discovered at the South Walker Creek coal mine, down under in the Bowen Basin.

The site contained a treasure trove of remnants: crocodiles and other reptiles more than 20 feet long… grey kangaroos that stood eight feet tall… enormous forest wallabies. And the largest marsupial of all: a prehistoric wombat the size of a small car, called a “diprotodon.” Many of the fossils bore teeth marks from the giant crocs.

Fossils were first found in this area six years earlier, during a cultural heritage survey with the indigenous Barada Barna people. Paleontologist Scott Hucknull gave credit to the tribe for the discovery. 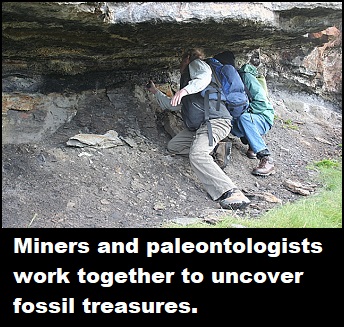 As you can see, for scientists interested in what the world was like millions of years ago, coal mines are as good as it gets. Mining companies know this, which is why they frequently lend paleontologists a hand.

Many of them even employ staff scientists and paleontologists who look for unusual formations and alert researchers when they find something interesting.

In addition to helping us understand the past, the paleontologists who work with miners also serve a more immediate purpose: They can identify natural hazards within the mine based on the fossil environment. The tests that these scientists conduct on found fossils can determine how safe an underground mine will be. Mining companies can then ensure that proper precautions are taken.

With continued mining, more fossils are being revealed every day. You could say these prehistorians have an entire industry digging for them.